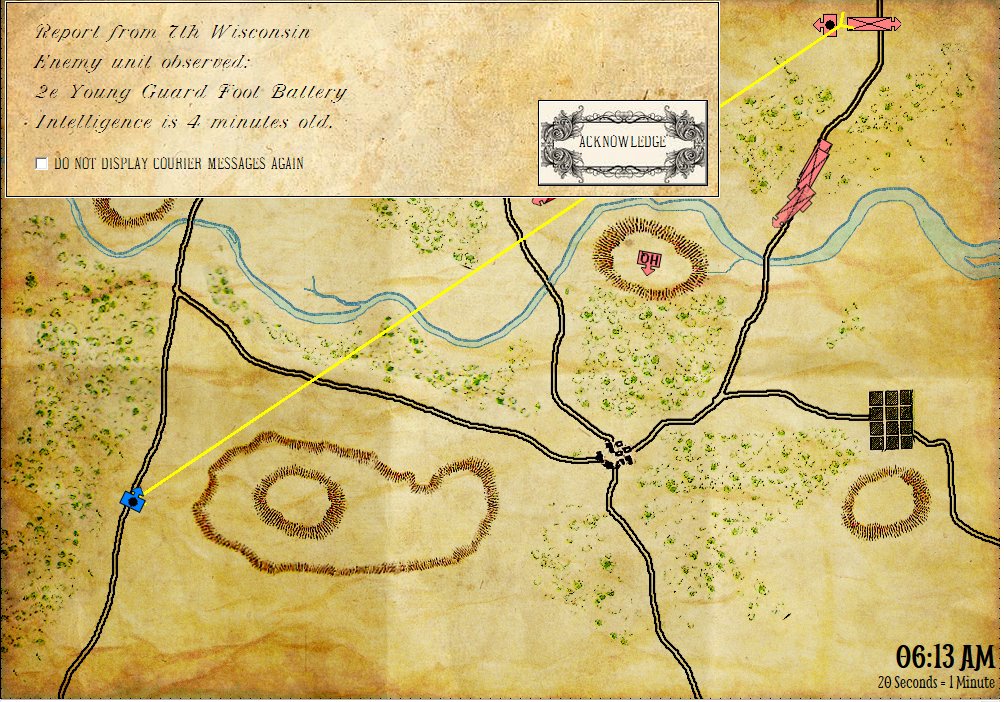 A courier reports that an enemy unit was observed four minutes ago. Note: the enemy unit has almost certainly moved on since then. (Click to enlarge.)

Location of your headquarters (HQ) unit is vitally important in General Staff. If an enemy (or friendly) unit is not directly observable to your HQ unit, the information of an enemy unit sighting is passed to HQ via courier. The amount of time for the courier to travel from the observing unit to the HQ is precisely calculated (see screen capture, above). Friendly units report their position every hour and dispatch a courier to HQ with this information as well. The time for a courier to travel from the reporting unit to travel to HQ is also calculated.

In essence, then, locating your HQ unit on a hill, ridge or other prominent feature is important if you want a clear view of the battlefield. Otherwise, you will be dependent on your couriers to penetrate the fog of war.

The phrase, ‘Fog of War’ (or Nebel des Krieges in German) was first written by Carl von Clauswitz in his famous treatise, On War (in 1832, first English translation in 1873):

War is the realm of uncertainty; three quarters of the factors on which action in war is based are wrapped in a fog of greater or lesser uncertainty. A sensitive and discriminating judgment is called for; a skilled intelligence to scent out the truth.

Update: some readers at Kriegsspiel Forum have quite correctly pointed out that at great distances units would certainly not be able to ascertain the name of the unit that they are observing. Consequently, we have changed the information provided to this:

Dispatch from observing unit modified to include distance and just unit type. (Click to enlarge.)

Now the question arises: how far could you see with a 19th century telescope? Do we need to include a maximum range for line of sight? Interesting question. Would like to hear your comments. 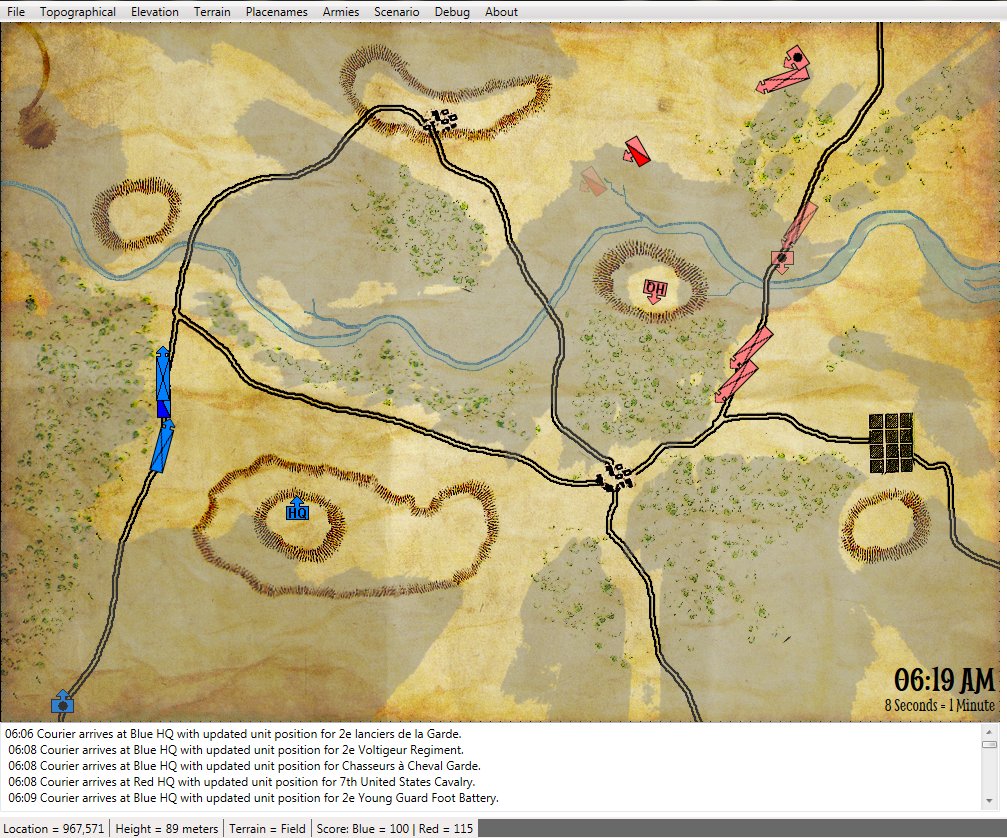 Screen capture of General Staff showing the 3D Line of Sight (LOS) areas that are visible to the Red HQ unit (grayish areas are not visible). (Click to enlarge.)

We are very pleased to show screen captures of General Staff that demonstrate some of its unique gamplay features. General Staff is different (at least as far as we know, and if there are other computer wargames that have these gameplay techniques, we haven’t seen them) in that you, the user, are assuming the role of the commanding general with his general staff. You do not have an omniscient view of the battlefield. The only unit locations (both friendly and OPFOR, or OPposition FORces) that you know for certain are the ones that you can directly observe. The above screen capture displays the areas that the Red HQ unit (U. S. Grant and staff) can see from their location on Riverview Hill. The 3D Line of Sight (3D LOS) algorithm in General Staff uses elevation and terrain maps to calculate the LOS for each unit. 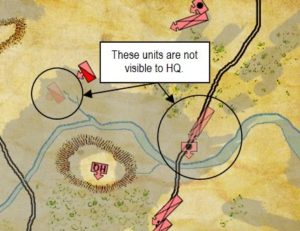 An example of how units that are not directly visible to HQ are displayed. The longer that a unit remains unobserved, the fainter it becomes. (Click to enlarge.)

When units are hidden from direct LOS they begin to fade (as seen in the screen capture to the right). The longer it has been since the unit has been observed, the fainter the unit is drawn. However, every hour, every friendly unit dispatches a courier to headquarters with its current unit location. When the courier arrives (his path is calculated and described below) the unit’s position is updated and the unit is displayed in full color. In the above screen capture, arriving messenger reports are displayed in the bottom of the screen. Enemy units, however, that have not been observed for an hour disappear completely from the map. 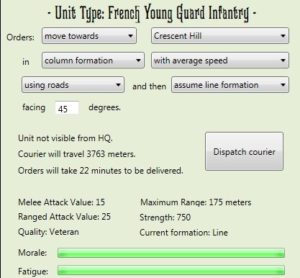 Orders are not given directly to units, as in other wargames, but are sent, via courier, from HQ to the unit.  The screen capture (right) shows the interface for constructing a unit’s orders. Orders are entered via unit-specific pop-up menus that specify the formation, direction, facing and speed for the unit. Also displayed is how far the messenger will travel and how long it will take for to deliver the orders. Couriers travel at 17.5 kilometers per hour and will attempt to use roads whenever possible. 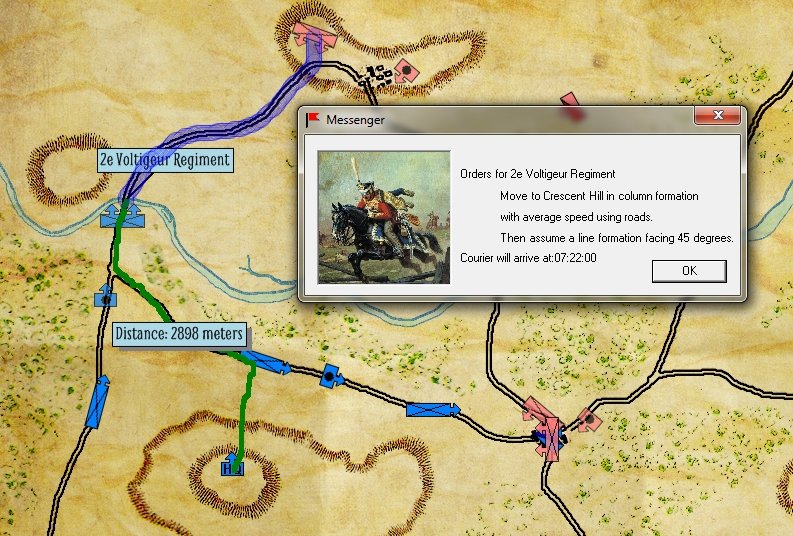 This screen capture displays the path from Blue HQ to the unit that the courier will travel (in green), the future orders for the unit (thicker blue) and confirmation of the orders. Note how the courier automatically takes advantage of roads. (Click to enlarge.)

We have since updated the Messenger box to look like this (in keeping with the 19th century late Victorian theme of General Staff):

A screen capture of the new Messenger information box.

We believe that this structure not only is an authentic depiction of warfare in the 19th century and how the generals experienced ‘fog of war’, but will greatly enhance the gameplay of General Staff.